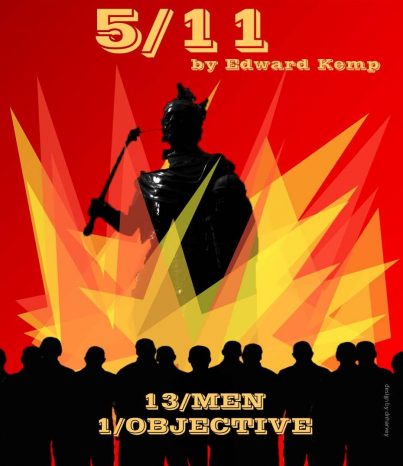 THIRTEEN MEN. ONE OBJECTIVE. WE HAVE OUR DATE.

The birth of an empire, the forging of a nation; two ancient enemies, two kingdoms, united in one man. A common language for the new nation, through a new Bible for Britain.

Not all are united. A religious minority continues to suffer persecution. Its young men, trained abroad as soldiers, return to England as radicalised extremists; home-grown terrorists plotting death and destruction in the name of their God.

At the centre, a twisted and deformed spymaster presides over an intelligence network. Priesthunters and informers, spies and traitors, secrets and lies. All for the greater good of the Nation.

5/11 (“five eleven”) is an epic and incendiary thriller about the Gunpowder Plot. Written by Edward Kemp, it was first performed at the Chichester Festival in 2005.

Overall, this is an outstanding performance of a very well-written and provocative play.