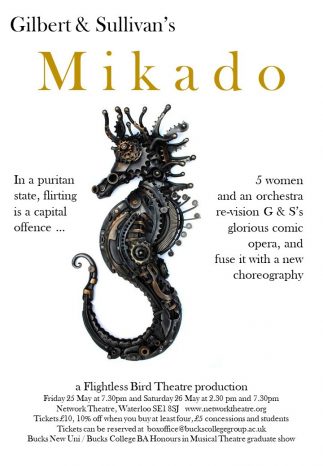 Flightless Bird Theatre’s Mikado is a 90 minute version of Gilbert & Sullivan’s most-loved opera, with a sparkling new choreography. The cast of five women slide, often mid-scene, between genders, in a parallel reality where steampunk meets brutal puritanism, in an ever so slightly dank space under Waterloo Station. Farce and vulnerability collide, as the citizens of Titipu try to control their desires and keep their heads, in the darkest of times, ruled as they are by a smooth-talking tyrant. In this high-energy production, the whole theatre becomes the performers’ stage, while the live orchestra eerily plays on.