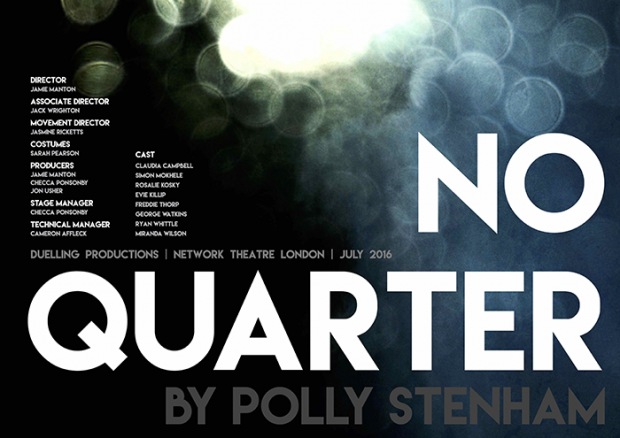 “You were brought up on mythology. Hollow mythology. That’s why you’re all stuck, all angry, a prince in the wrong story.”

Fleeing a world he has rejected, Robin finds solace in his music and the sanctuary of his remote family home. But as his kingdom begins to crumble around him, how far will he go to save it and at what cost?

NO QUARTER, originally performed at the Royal Court in 2013, is a dark yet tender drama exploring self-identity and displacement. Polly Stenham is an award-winning playwright most widely known for her work at both the National Theatre and the Royal Court Theatre (Hotel, Tusk Tusk, That Face).

DUELLING PRODUCTIONS is an emerging production company set up and run by brothers, Jamie and Charlie Manton. Encompassing Film and Theatre, Duelling Productions aims to provide a platform and exposure for those aspiring creatives who strive to follow a career in the arts.