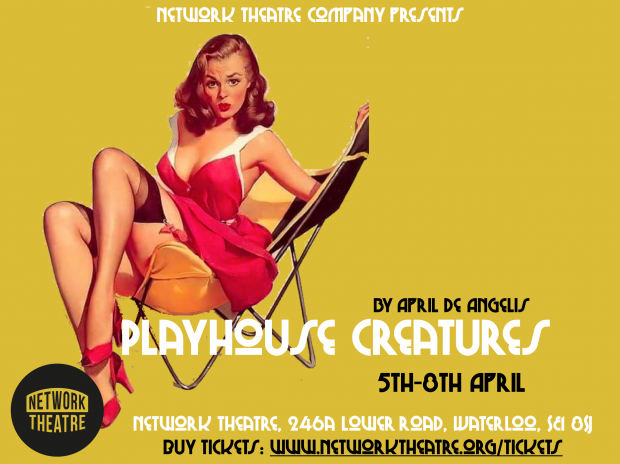 The play is set around 1670, in the earlier part of the Restoration period, just before it starts to become a more respectable means of employment for a woman. These actresses, then, are the pioneers, fighting for their careers and a genuine status as artists equal with the male actors who have already achieved that distinction. The story follows Nell Gwynne from the moment when she first hears that the new theatre wants actresses to the end of her career and her choice to accept the beneficence of the King, as his mistress. This simple plotline is enriched by the stories of three other actresses who, in contrast to Nell, all fail to gain the respect of men, even though there is a wonderful moment when they are allowed to be equal shareholders in the company. All three of the others have to leave their chosen careers. Only Nell chooses to leave. The play is set in a framework of ‘the nether region,’ a kind of no-man’s land, perhaps hell, perhaps limbo. This is also set in a theatre – derelict and haunted by the ghosts of these early actresses. The play has a strong feminist message, a cry for equality, as raised by these early pioneers, which is designed to question our place as women even in today’s seemingly equal world.

“With delicious absurd extracts from the heroic repertory and frantic dressing room scenes, the prevailing tone is comic but you are not allowed to forget the gutter waiting to reclaim these glittering figures.” – Independent on Sunday

An amateur production in arrangement with Samuel French